#BibleStudy continues today with a discussion of the topic of darkness, as in, "dark to light."

You are the candle here.

Before writing this, I watched "Out of the Shadows" (especially after the 39 minute mark). It is a significant film, and it’s free. Feat. interviews with @Kevin_Shipp and Liz Crokin, plus vital historical material. H/T to @WeAreP22. Link:

Here is the website associated with the documentary. (I have to be honest I am upset from watching it….it ties everything together in a very calm, reasoned, way that is almost chilling – OSS, CIA ,Nazis, Aquino/Temple of Set, Podesta, Abramovic…)

Out of ShadowsThe Out Of Shadows documentary lifts the mask on how the mainstream media & Hollywood manipulate & control the masses by spreading propaganda throughout their content. Our goal is to wake up the gene…

From minute 39 to the end is about 40 minutes. The footage, the interviews, the documentation…the part where Cindy McCain says they knew about Epstein but didn’t do anything… please take a moment to watch, even briefly, and share while we still can.

If you want to read today’s earlier thread you can. This one centers on the power of the mouth/the word as significant for right now, for victory. It covers the @POTUS‘s quote from Isaiah yesterday – which mentions dark to light.

Isaiah 60:1 "Arise, shine, for your light has dawned; The Presence of the LORD has shone upon you!" 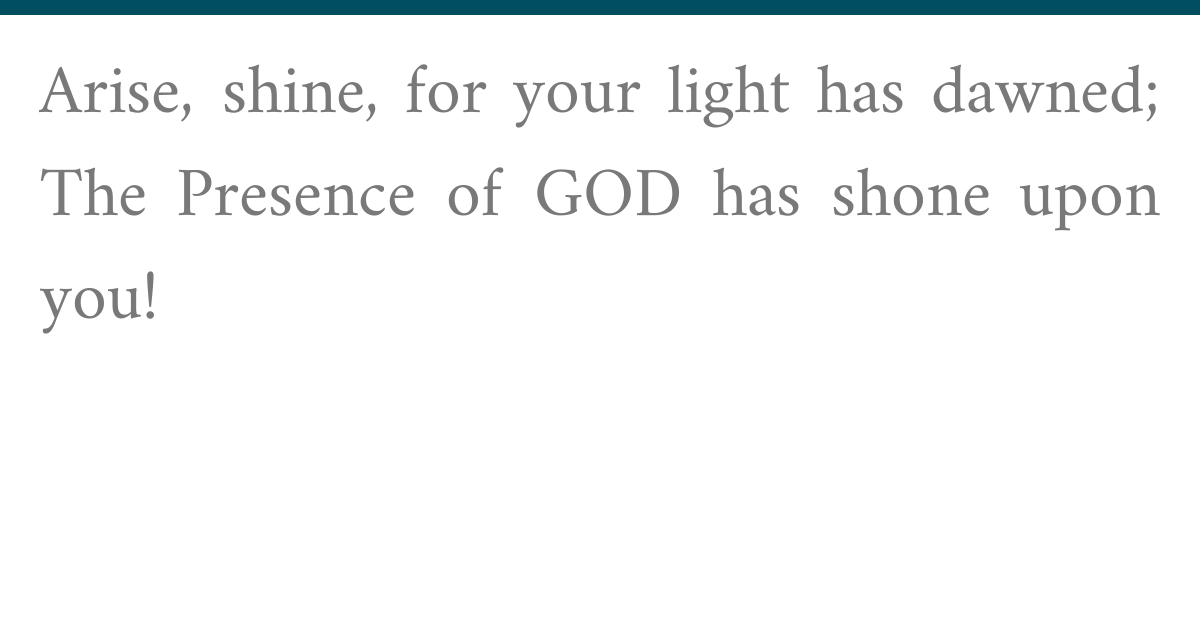 Isaiah 60:1Arise, shine, for your light has dawned; The Presence of the LORD has shone upon…

Isaiah 60:2 "Behold! Darkness shall cover the earth, and thick clouds the peoples; But upon you the LORD will shine, And His Presence be seen over you."

Isaiah 60:3 "And nations shall walk by your light, Kings, by your shining radiance."

The question to be asked and hopefully answered in this thread is why God allows evil to exist, or what is the nature of evil, or how do we understand the connection between evil and the concept of darkness?

"Darkness" as a concept in the Bible first appears in Genesis 1:4

(1:1) "When God began to create heaven and earth—(1:2)the earth being unformed and void, with darkness over the surface of the deep and a wind from God sweeping over the water—"

"(1:3)God said, “Let there be light”; and there was light.
(1:4)God saw that the light was good, and God separated the light from the DARKNESS."

Correction: Actually, there "was darkness" in Verse 2, already

Heaven
|
Earth–which had "darkness" and "wind"
|
God separated the "light," which was Good
|
What was left was "darkness"

What "darkness" existed in the Earth prior to the separation of light from darkness?

How can a thing exist before the thing is the thing?

Simone Venturini talks about the notion of "darkness" that existed before "darkness" was created, noting Genesis 1:5.

The kingdom of darkness (Genesis chap. 1, vers. 4) – Simone Venturini’s Blog“And God separated the light from the darkness” (Genesis ch. 1 , vers . 4 ). God – Elohìm – separates light from darkness, because God had seen that the light was good, because it conformed to his wi…

“And God separated the light from the darkness” (Genesis ch. 1 , vers . 4 ). God – Elohìm – separates light from darkness, because God had seen that the light was good, because it conformed to his will, while the darkness – in Hebrew chòsheq – obviously did not."

"So the darkness doesn’t correspond to the will of God, because obviously it is not willed by God, and yet darkness existed before the creation of light and, probably, before the very creation of the earth!"

"In fact, taking Genesis 1:2 as the continuation of verse 1, after the creation of all things – that is ‘heavens and the earth’ – the earth was ‘without form and void’ and darkness hovered over it."

"the darkness in the Bible represents the evil (eg . Proverbs 2:13) and should not be confused with the night (see Genesis 1:5 ) which replaces the day after the sun has set."

"Instead darkness is a ‘presence’ that the New Testament even defines as ‘kingdom’ (cf. Luke 22:53 ). However starting from the very first pages of the Bible, God holds full control over darkness, because he has separated it from the light, reserving them a ‘space’."

So…what is going on here?

If you read Q, or watch the documentary mentioned above, or read the blog about the Illuminati and how they apparently have the world divided up…or even if you read about law enforcement taking down godawful human beings…where did "darkness" start?

To understand "darkness," you have to look at the Hebrew.

You have to fill in the blanks.

Verse 1: "In the beginning [of material reality], God created Heaven [the spiritual realm] and Earth [the material realm.] [And in the process something happened that we call the "shattering of the vessels," which led to evil existing.]

Verse 2: [As a result of the "shattering of the vessels,"] and the world was chaos (confusion), and darkness on the face of the expanse [Sforno] [lit. "the deep"]; and the spirit [lit. "wind"] of God was hovering over the "face" of the waters."

Think about an explosion.

Think about a temper tantrum.

When God BEGAN to create heaven and earth—

The evil began in the beginning of creation, as the product of creation itself.

Creation itself involved a descent from the purely spiritual world, into the world of the physical, and in the descent, evil was formed.

When the world went from unity to division [heaven and earth], that action — in and of itself — generated something called evil that dominated the earth, which was countered by the spirituality that hovered over the water.

"Kelipah" is called "husks" like "husks" on the outside of corn.

In the beginning of Creation, when the Earth exploded into existence, the Earth was chaos, and darkness ruled the expanse, while God’s spirit hovered.

(Let’s leave aside the fact that there is a grammatical issue between Verse 1 and Verse 2 of Genesis 1, which is "And when God began creating the heaven and the earth, AND the earth was chaos…") — that doesn’t read right, and we could drill down, but let’s hold off.

Now "chaos" is linked with "the kingdom of darkness," which is "evil," as we see in Genesis. "And the earth was chaos."

In the Batman comic series, Gotham City constantly threatens to descend into chaos, everything out of control and criminals ruling.

God takes the state of chaos and creates order from it. (All created things, including night and day.)

Genesis 2:18-21, God creates a wife for Adam, but what happened to the first one?

As you probably already know, we consider that she was Lilith, who ran away when Adam tried to lead, and she married the head of the demons in the kingdom of evil.

So you have a kingdom of evil, which has been established to encase the good that is in this world, so as to give humanity a meaningful choice and a struggle toward doing what is right.

And a realm of people, part-human and part-demonic, who rule the kingdom of evil.

Now go back to Isaiah 60:2, which @POTUS cited yesterday in his prayer.

"Behold! DARKNESS SHALL COVER THE EARTH, And thick clouds the peoples; But upon you the LORD will shine, And His Presence be seen over you."

That is the EXACT SAME PHRASING AS GENESIS 1:2

(Well, in English it’s the same. In Hebrew it’s slightly different. Analysis for another day.)

Why would "darkness cover the earth," even after many generations?

Obviously, because people can’t see past the corn husk, to liberate the food within. (The harvest)

In addition, says Isaiah, darkness will cover the earth "and thick clouds the peoples," because they will be drowning in sin, and refuse to recognize God.

"But upon you the LORD will shine, And His Presence be seen over you."

A commentary (Midrash Tanchuma Buber) interprets this to mean: "In the world to come" [the world of redemption] I am bringing darkness to the nations of the world [rejectors of God] and the light to you."

Here is a list of all 70 "nations of the world." (they are the ancient ones)

"So why did G‑d create evil? Why do we live in a world which is full of injustice and where the wicked have the upper hand?"

"In order to earn that reward—so that it should not be what the Zohar calls “bread of shame,” or unearned reward—G‑d first placed us in an arena of free-choice."

"G‑d made a physical creation which conceals its Divine source, and He placed a soul within a body specifically to refine and elevate the body and its portion in the world."

"The greatest achievement of the soul is to take a corporeal and crass body whose inherent nature is animalistic, and use it to transform darkness into light."

"The greater the darkness and the stronger the forces of evil, the brighter is the transformation of that darkness into brilliance.

Kabbalah uses the term Kelipah to describe evil. Literally, Kelipah means a “peel” or “shell,” as in the peel of a fruit."

"he Shattering of the Vessels [which produced Kelipah] was not an accidental flaw in the Divine plan. On the contrary this process allowed for the creation of evil providing man with the exercise of free choice."

"The ultimate refining of the world will take place in the days of Mashiach [Messiah] and thereafter in the time of Resurrection in which G‑d “will remove the spirit of impurity from the world.”

"In that era, all Kelipot will be removed and the Divine service will be elevated ad infintum in the realm of Kedushah [holiness]."

"That period is often referred to as Shabbat, the day of rest….Now is the time that we should be preparing for the ultimate Shabbat, when the work of today—our building of a dwelling place for the Divine in this world—will be enjoyed."