Can you stand with God when everyone is against you?

In this week’s portion, Moses sends a group of men to check out the Land of Israel before the Jewish people go in to conquer it.

Most of them come back with a bad report, biased & made to stoke fear.

Joshua and Caleb stand steadfast, and the Jews decide to murder them (they fail).

It is interesting to note how the Bible tells us the truth. There is no idealized portrait of the Jews here. It’s basically one shitty episode after another, and the behavior here is nothing short of shocking.

Because you’d think that after everything God did for the Jews, saving them from brutal slavery, making a covenant with them (us), giving them (us) the Torah, the naysayers would finally shut up already.

Unfortunately, however, that did not happen, and we tell the story from the vantage point of thousands of years later, as if everything is just so obvious, when in the time it happened people argued back and forth.

You see the very same exact dynamics at work with President Trump and what he’s trying to do. There are a few people who are willing to speak up. The rest are naysayers, and they threaten those who stand firm.

You see that the very people you look to for moral guidance vanish as soon as things get difficult.

Or worse yet, they come after YOU to attack YOU for doing what is right.

This is Kate Cronin-Furman.

She has added her own ignorant two cents to the chorus of voices out there attacking our law enforcement agents, who are in danger of dying every single day, as they cope with the mass invasion of migrants from the south.

Cronin-Furman calls for the public to identify Border Patrol agents by name. This is a threat, and the New York Times has published this threat.

Quote: “The identities of the individual Customs and Border Protection agents who are physically separating children from their families and staffing the detention centers are not undiscoverable.”

Headline: “The Treatment of Migrants Likely ‘Meets the Definition of a Mass Atrocity’”

Subhead: “Children are suffering and dying. The fastest way to stop it is to make sure those responsible, including the foot soldiers, face consequences.”

Cronin-Furman: “The debate over whether ‘concentration camps’ is the right term for migrant detention centers on the southern border has drawn long-overdue attention to the American government’s dehumanizing treatment of defenseless children.”

Cronin-Furman: “A pediatrician who visited in June said the centers could be compared to ‘torture facilities.’ Having studied mass atrocities for over a decade, I agree.”

INCITEMENT THROUGH APPEAL TO AUTHORITY

The media has gotten away with publishing fake news like this for so long, on such a scale, that their continued activity in this regard can only be viewed as a seditious conspiracy.

A conspiracy doesn’t require that you sign an oath in blood. It means that you are coordinating with other people. If the media environment is such that anyone pro-Trump is targeted, then there is a conspiracy happening to overthrow the President and thus the government.

What percentage of Trump coverage is negative?

“A Harvard study found that 80 percent of Trump coverage was negative during his first 100 days in office.”

Worked at Harvard and University College London as a researcher and lecturer.

Has written about mass atrocities and accountability.

But has she studied what’s going on at the Southern border?

Lots of interesting good work…but it appears the answer is no…and she just published an article in the New York Times which (wordplay aside) basically calls detention centers concentration camps, with torture, and says Border Patrol agents should be personally accountable

In the Bible, the spies spoke wrong, but they spoke from evidence.

Based on what is this inexperienced academic saying that agents should “face consequences?”

Where are the Nazis, exactly?

Cronin-Furman “heard” that someone called it “torture” – did she bother to watch what the person in charge had to say about all this, let alone go there herself?

Please don’t get me wrong. I don’t doubt this professor’s sincerity.

But she has no business writing such an incendiary article, particularly considering the fact that she has never studied it, & offers secondhand evidence from “someone who went somewhere and saw something”

To be fair, anyone who takes an objective look at the situation would conclude that there are or were children suffering under inhumane conditions, and that the government is responsible.

But the reason for this horrendous situation is about as far from Nazi Germany as can be.

Whereas the Nazis were deliberately rounding up Jews and others in order to kill them, the United States is coping with a massive horde of people — some legitimately needing asylum, others not — taking advantage of a legal loophole.

The tactics are dirty and underhanded, much like the Hamas playbook – create the victim, show the victim suffering, blame the hapless authority for being cruel and establishing an apartheid state.

This video of Speaker Pelosi surrounded and in danger pretty much sums up the true situation. This is a border invasion – for votes, for traffickers, for gangs, for drug running, and more – and anyone who truly cared about people would reform the asylum law. 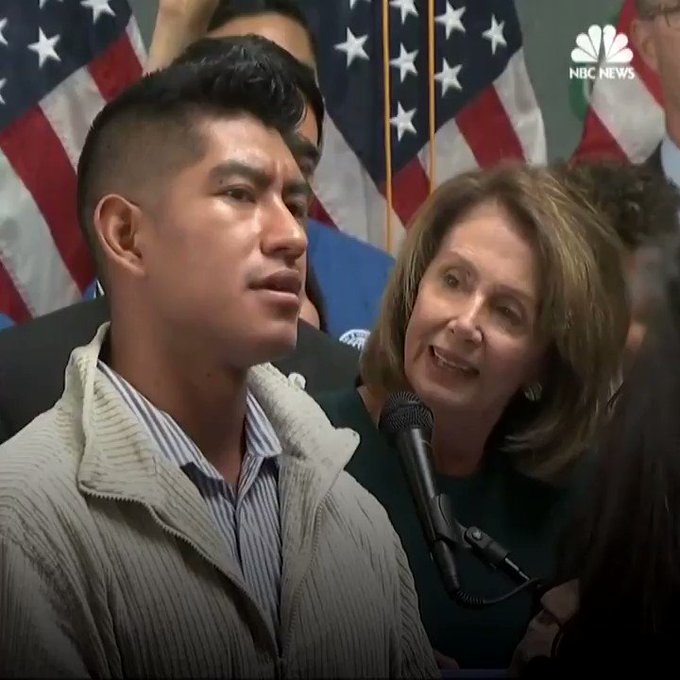 The evil spies who returned from Israel said that it was a land filled with giants who would eat the Jews alive.

People like Cronin-Furman are no different. They just use a different kind of scenario, calling our Border Patrol agents who eat the suffering ones alive.

When you lose your God-compass, everything you think of seems like morality in the moment.

And your own moral compass can make you do some horrendous things.

By Dr. Dannielle Blumenthal. All opinions are the author’s own. Public domain. Free photo via Pixabay.